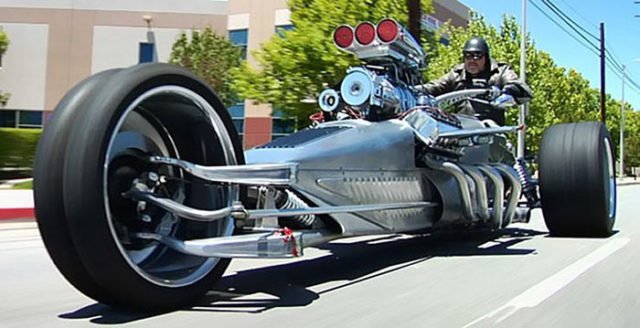 The trikes can give you the “mile-eating” comfort that many sport bikes, cruisers cannot. The trikes become more popular especially among the people who still love the life on the road although they have reached a certain age. From Harley’s Tri Glide Ultra to the original Honda Goldwing, trikes can offer comfort. For those who want to get their hands dirty, the trikes are a great opportunity for a custom-build project. The Rocket II is one of the most unique trikes. It was designed and built by two of the most creative artists in the world and has 1,000-horse Hemi.

Tim “The Frogman” Cotterill is an English sculptor whose artistic talents extend to vehicle design. Somewhere around 1989 he was inspired to build a radical, three-wheeled, six-cylinder trike.

A few years ago, Cotterill met another artistic gearhead: Michael Leeds of Blastolene. Leeds designs and builds high-profile machines, including a stunning retro/future roadster called the Blastolene Special owned by Jay Leno. They started planning what Tim called “A custom motorbike like no other” which became known as the Rocket II.

They created a rough frame on an assembly jig, put down 2×2 cedar boards to create a 12-foot wheelbase, and placed a dummy foam 426 Hemi block into it. Then they replaced the wood with 1.75x.25-inch-wall DOM steel tubing and welded it up. Wood prototypes were cut on a band saw to help speed up the development process. Once the arms were fine tuned, the production versions were cut out of 25-inch steel plate. The arms had to be beautiful and strong, as they’d mount a 40-pound, 18×26 front wheel, two 24-inch Metzeler motorcycle tires, an aftermarket brake system, and the steering linkage. It took them eight tries in eight months to zero in the handlebar-to-draglink setup.

Rocket II needs massive power and this is where John Arruzza, an expert Hemi builder, comes in who made a monster for this machine. It started with a rare, 1 of only 50 cast 426 Hemi blocks. Its forged internals have to contend with a massive 8-71 blower, which puts the squeeze on massive amounts of fuel from two big carbs. It takes a Dave Nelson-built MSD ignition, to charge the 16 spark plugs (two per cylinder) to ignite the highly compressed mixture. The engine runs on plain old 91-octane pump gas and achieves an amazing 1,000 HP.

All of those ponies pass through a 3-speed TorqueFlite trans and a Kugel Komponents rear axle, before punishing the 20-inch rear rims and 18×31 Mickey Thompson tires. Coilovers smooth the ride, while inboard disc brakes scrub off speed in a hurry. Final touches include a custom Classic Instruments gauge cluster molded into the back of the blower, some legendary “rocket” taillamps from a ’59 Caddy, and of course, a miniature red frog.

Tim doesn’t know how fast it will go, but he installed a 240-mph speedo. What he knows is that in just four seconds it will go from 0 to 100 mph. 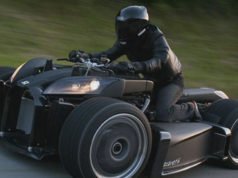 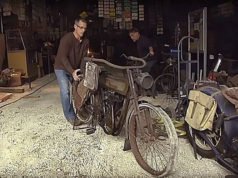 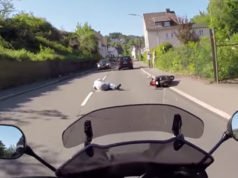 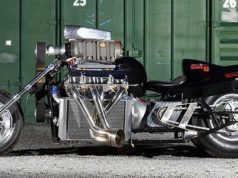 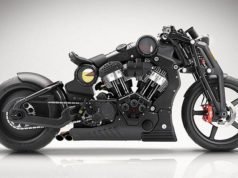 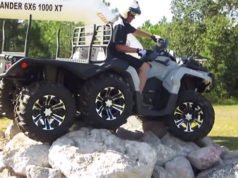 Only a Superhero Can Ride Chopper City’s PS-Pod Replica of the Bat-Pod From Dark...

Cadillac One: Barack Obama’s Rolling Fortress is the Most Secure Car...