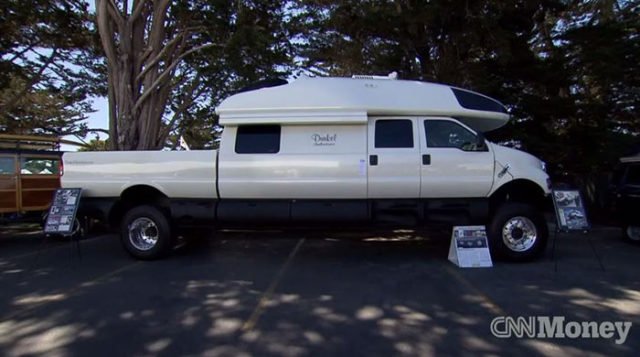 What we have here is a Ford F750 pickup truck, which is trying to beat the best luxury RV, at his own game. Built by Dunkel Industries as a special personal project of Peter Dunkel whose company specializes in moving large equipment, it is named the World Cruiser. Made for covering continents in style, this beast has a kitchen, a bathroom, a lounge and is capable of sleeping 6 persons with the entire luggage they can think of since it has 4 tons of cargo capacity. In perspective that might be the most expensive rolling bed, due to the fact that this monstrosity costs 6 million dollars, which equates to 1 million per bed. Nobody is able to deny the luxury setup but we believe that the owner will have a bit of a problem explaining the price tag to a future buyer.
Would you pay 6 million for this, or does a 5 million dollar mansion and a million dollar RV sound better to you?

Something you Don’t See Every Day, Insane Drag Racing on ICE!

Kids Drifting in a Mustang!