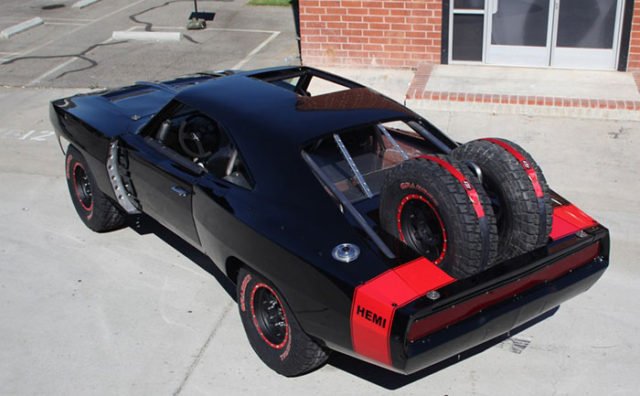 If you’re gonna take your vehicle off road, might as well do it in style with a completely custom 1970 Dodge Charger!

This car was built by Dennis McCarthy, who has built stunt cars for five of the seven Furious movies. McCarthy said that of all the Fast And Furious cars, including Brian’s Supra and Dom’s iconic 10-second Charger, this is his favorite by a long shot!

Here are some interesting facts you might want to know:

– The Off-road Charger is powered by a 500 cubic inch V8 HEMI engine, mated to a 3-speed automatic transmission, boosting about 400 HP;

– There wasn’t just one or two Chargers built and used for the film, there were 11. Each was designed for a specific role within the production (interior shots, exterior shots, stunts, etc.);

– All 11 of the Off Road Chargers were built from unsalvageable wrecks, so no cars worthy of restoration were destroyed;

– Despite the Hemi decals on the Chargers, all were powered by Chevy LS crate motors;

– According to the builder Dennis McCarthy, replacement Charger body panels aren’t that hard to fabricate, but grills and tail panels are, which is why the off-road Charger has a very Mad Max mesh front;