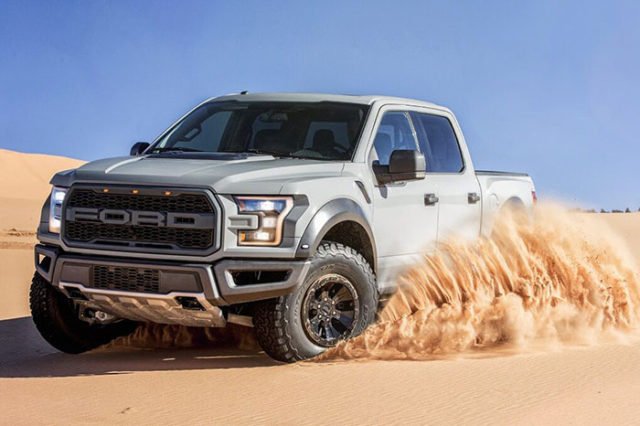 2017 Ford Raptor F-150 ! Smarter, tougher, and more efficient! In 2010, when Ford’s first F150 Raptor made its debut it was spectacular, and surprising. It was the first true high-perform­ance off-road pickup truck with a factory warranty, a proud totem of badassery. Developed by Ford’s Special Vehicle Team, it somehow survived both the Baja 1000 desert race and the worst economic faceplant in recent history to become a certified critical and commercial success!

While many details are still guarded, this second generation truck will launch in autumn 2016 as a 2017 model under the new Ford Performance banner. So it’s just called the 2017 Ford Raptor. Ford has given it a dedicated chassis and powertrain to go with the special bodywork. The 2017 Ford Raptor new boxed steel frame is stronger than ever and will come in two sizes: the sportier 133-inch-wheelbase SuperCab and the roomier 145-inch SuperCrew. Despite the beefier frame, Ford claims that the new truck’s aluminum body (as well as the composite hood and front ­fenders) helps trim 500 pounds from its pred­ecessor’s curb weight. Considering the Raptor SuperCab weighed 6100 pounds, we’re strongly in favor of the diet.

The 2017 Ford Raptor F-150 was presented in Detroit, at the International Auto Show 2015. Because of his iconic style it is immediately recognizable. 2017 Ford Raptor! There isn’t a big, iron-block V-8 under the hood no more, so that should save some weight right there. The 2017 Ford Raptor EcoBoost is the first and only recipient of a second-generation 3.5-liter V-6 with twin turbochargers and direct fuel injection. Ford says the high-powered EcoBoost engines that were meant for sports-car racing influenced some of the production V-6’s improvements. This includes a new aluminum block and updates to the fuel system, cylinder heads, and internals. To further improve airflow, the high-output engine exhales through a true dual-exhaust system with twin outlets notched in the rear bumper.

Also for the first time, the 2017 Ford Raptor F-150 has 10-speed automatic transmission and a new four-wheel-drive transfer case, which will work with a terrain-mode system to configure the truck for varying conditions (mud, snow, rocks, etc.). Controlled via steering-wheel buttons and a menu in the cluster, the system will tailor the characteristics of the engine, drivetrain, stability control, and more to help weekend warriors get the most from their Raptors without rolling them down hillsides.

Given the adequate suspension and the giant tires, we’re expecting a much smoother and comfortable ride. If you miss the roaring of the 6.2-liter V-8, remember that the 2017 Ford Raptor F-150 new turbo six will be more efficient and soundly trump the V-8’s 411 horsepower and 434 pound-feet of torque. The 2017 Ford Raptor F150 is powered by high-output 3.5L Eco Boost V6 engine, which gives more horsepower and torque. It is suitable for sports car racing because of his improvements that include new aluminum block, upgrades to the fuel system, internals and cylinder heads.