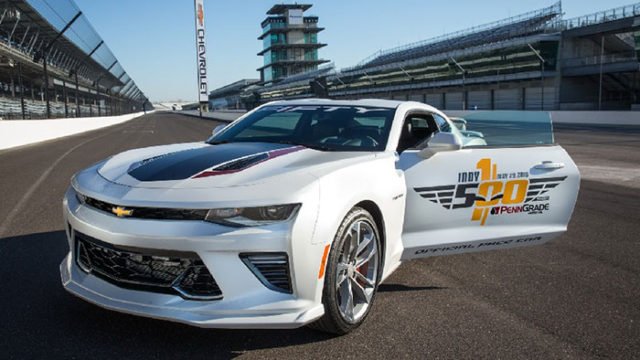 When you mention the number of 50 and even beyond that to the anniversary then we can only say: “Oh, man that is a lot of anniversaries!” in this case we talk about 50th anniversary of Chevrolet Camaro SS. It will be for the 100th Indianapolis, 500 race event, and it will be a pace car. If you follow everything about this story, than you are met with legend Roger Penske, he is racing driver and this car will be driven by him, who is also celebrates his own 50 years as no less but a race team owner. Is completely clear what kind of event it will be that?

But it is special event for Camaro’s too, because it will be pace car for ninth time and 27th for Chevrolet at all. There will be a lot of anniversaries. The executive vice president of Global product Development, Mark Reuss, also a president of Global Purchasing and Supply Chain said: “The Indianapolis 500 and Chevrolet, have a long, long history full of stories and experiences. That’s because it is an honor to mark respective Indy’s 500 milestones and Camaro in the same time. And what can we say about Roger Penske? It is a huge privilege, to have a person like him for perform like this, for driving duties. As you are met, he and his team helped Chevrolet to earn no less but four IndyCar manufacturer, but consecutive, and that’s titles since 2012. Here will be four Camaros which will be running for total support the race and as pace cars. It will be painted in exclusive White Abalone with decals on their doors “100th running of Indianapolis 500” and iconic logo will be on the quarter panels of the track.

1969, was year when Panske’s story began with Indy 500, and here Donohue was his driver. Also there are other legendary names like Al Unser, Mario Andretti and Rick Mears were driven for him through the years. And there were winnings no less but four times the Indy 500. Juan Pablo Montoya brought the 16th Indy 500 victory for this Team as first place. Penske Team and he were looking for no less but their 17th at this year’s event.

Riding on Two Wheels With a Truck!