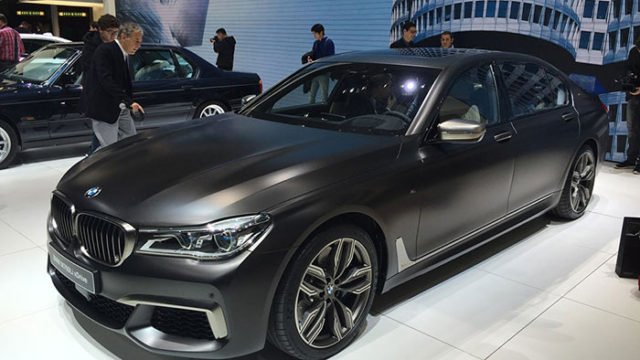 Rumors of BMW planning to build an M7 have been floating around for quite a few years, but Munich has yet to offer a high-performance version of its range-topping limousine as of 2016. The Germans did launch the M760Li xDrive model for the 2017 model year with 600 horsepower, but the sedan isn’t a full-fledged M car. That may change in the future though, as BMW has announced plans to expand its range for M-branded models in March 2016. And with what appears to be a mule of an M7 already spotted on public roads, and BMW’s competitor for the Mercedes-AMG S63/ S65 could be here as soon as 2017.

The big question here is “why now?” Well, BMW has been feeling the heat from the Mercedes S63 for some time now, but it was able to fend that off with its partner in crime, Alpina, and its B7. Now, with Cadillac causing all sorts of hell with its V-Series lineup and the looming CT6-V, BMW has no choice but to remove the sandbags from the 7 Series and create the first high-performance full-size since the limited-edition 745i SA, an actual M7 without the badges, built for the South African market between 1984 and 1987.

While Munich has yet to specifically confirm the upcoming M7, our paparazzi caught a group of M-badged cars out testing that included a 7 Series equipped with bigger, cross-drilled brakes. While the sedan sports the regular 7 Series body kit, the performance brakes and the fact that it was seen alongside two BMW X6Ms and an M5 suggests that BMW is indeed hard at work to bring us the first-ever M7.

With the debut of the M7 all but a certainty, we decided to dive into the rumor mill and fish out some details that will give you a good idea of what the M7 will bring to the table.

Confuse the Cops with this Fearsome Helmets!